BACK TO MAP SEARCH

Peter Baber is a commercial sheep farmer with 1,100 breeding ewes in a high health status flock observing strict biosecurity measures. He has pioneered performance recording of Suffolks and Texels without creep feeding on grass alone for over 20 years. Both flocks rank amongst the top performance recorded flocks in the UK. More recently, intent on creating a new efficient and productive maternal breed, Peter has played a key role in establishing the Exlana breed since its inception. He believes that worm control through genetic selection and constant FEC monitoring is an essential part of maintaining flock health and profitability.

He says: “I’m in this business for the long term and I believe that the future of the sheep industry lies in producing genetically superior, high health status stock, capable of thriving on grass alone.  We only sell breeding stock direct from our farm so what you see are animals in their ‘working clothes’ – there is no pre-sale pampering and we’re proud of that.”

Peter has also been invited to take on numerous advisory positions within the sheep industry, including Chairman of the Sustainable Control of Parasites in Sheep (SCOPS) and the English Sheep Health and Welfare Group (SHAWG). 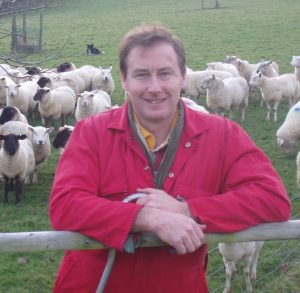 This graph shows the seasonal trends and timing of treatments for stomach worms.

*Interpretation of an FEC is quite complex and depends on a number of factors you should discuss with your vet or advisor. These figures are a guide without a problem with Haemonchus contortus (SCOPS Guidance).

This graph shows the seasonal trends and timing of treatments for fluke.